In the project Fused Synergy we designed a variable property 3D printing effector and mounted it on a robotic arm to perform spatial FDM printing.

Precedent
Previous research in this field includes Mesh Mould and VPRP. Mesh Mould is a project by Norman Hack at ETH, exploring the making of a space frame through robotic fabrication processes. In this project, plastic filaments were extruded to form a space frame serving as the formwork for a non-standard concrete structure. Another project, VPRP (Variable Property Rapid Prototyping) by Neri Oxman from MIT, aims to realize multi-material prototyping. It introduced a technique to produce heterogeneous material property in rapid prototyping according to the performance requirements of different components.

Goal
Our aim is to achieve spatial variable property printing. Compared with previous spatial printing techniques, variable property printing comes with several advantages. First, various properties serve different functions in a heterogeneous object, as our first prototype illustrates. Some horizontal extrusions are made of transparent PLA. Therefore it is almost invisible to the sight while providing structural reinforcement for all vertical components. Second, a mixture of materials enhances performance for the desired function. For example, in past spatial printing research, either PLA or carbon-fiber filament could balance surface neatness and structural strength. PLA has good flexibility but cannot obtain strength immediately after extrusion, while carbon-fiber is strong when extruded but it is crisp and may easily break when unexpected force is exerted. Mixing these two varied properties combines their merits and eases successful extrusion.

Approach
Our approach for realizing this project involves several aspects. First, we employ a novel hot-end for FDM printing. Within the tip of this hot-end, three filaments are merged into one filament. Second, a digitally controlled feeding system dictates the percentage of different material in the extruded filament. The feeding system adopts an open-source extruder driven by stepper motor, which is controlled by an Arduino. Third, an air cooling system is employed to refrigerate newly extruded material, giving it immediate strength. An air pump controlled by an Arduino provides the air flow. Fourth, the Arduino control system could communicate with the robotic arm and respond to its commands. Fifth, we program the robotic arm to make the machine work.

Result
We made two prototype models with this prototyping machine. The first one got its shape from a stigmergic algorithm, the biomimicry of Physarum polycephalum. We applied gradient color on it by using two different color filaments for the spatial curves and a transparent filament for supports. This is challenging for traditional FDM printers; since their branches are thin and vertical, the shape is not stable when printing. We added horizontal connections at regular height intervals, and the connections were transparent so as not to interfere with the overall appearance. The second one is a space frame. We used carbon fiber filaments and ordinary PLA filaments as construction material. The combined material overcame each individual material’s setbacks, so the fabrication process was much easier. This case demonstrates the possibility of variable property 3D printing of space frame.

Limitation
First, we experimented with variable property printing of a space frame, but quantitive research on structural performance is still to be done. Although we see potential in this method, more research is needed to confirm its advantages. Second, due to the range limit of the robotic arm, this project is only done on a small scale. Therefore, unexpected problems may rise when we scale it up. Third, the printing process and techinque has significant room for refinement since none of the prototypes were finished in a single run. Problems occur during the printing process, and sometimes we had to readjust the machine before continuing printing. 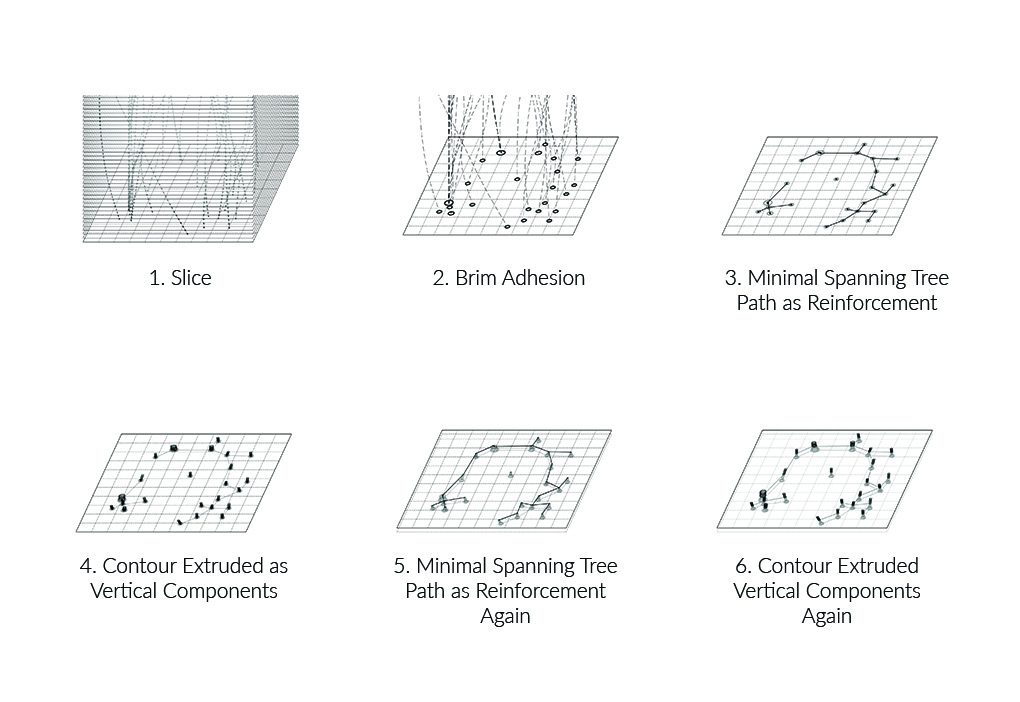 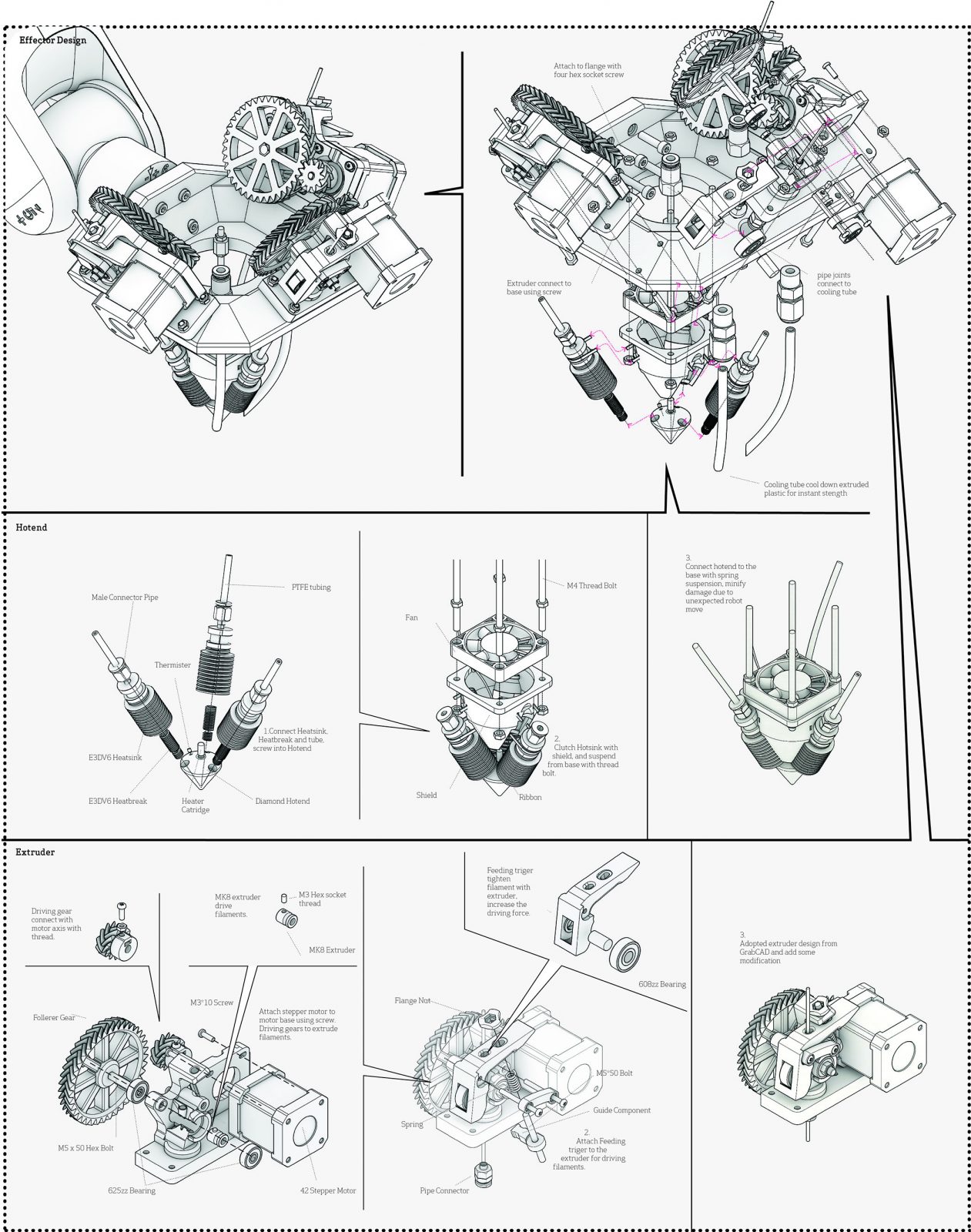 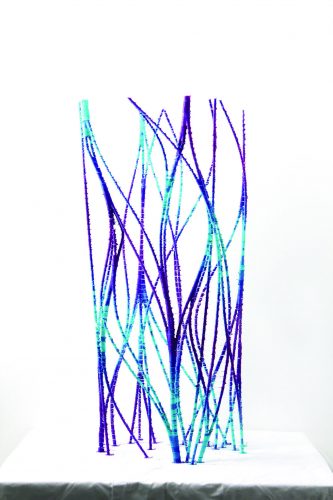 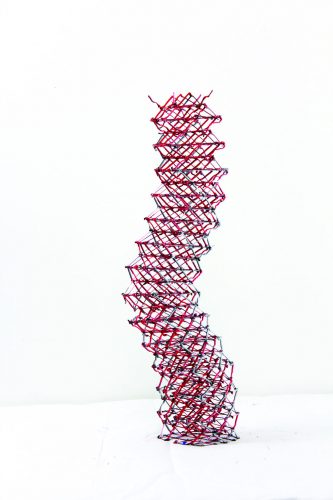 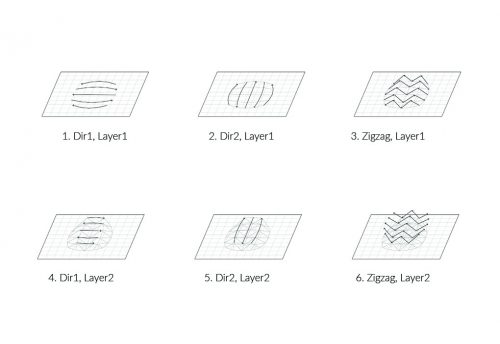 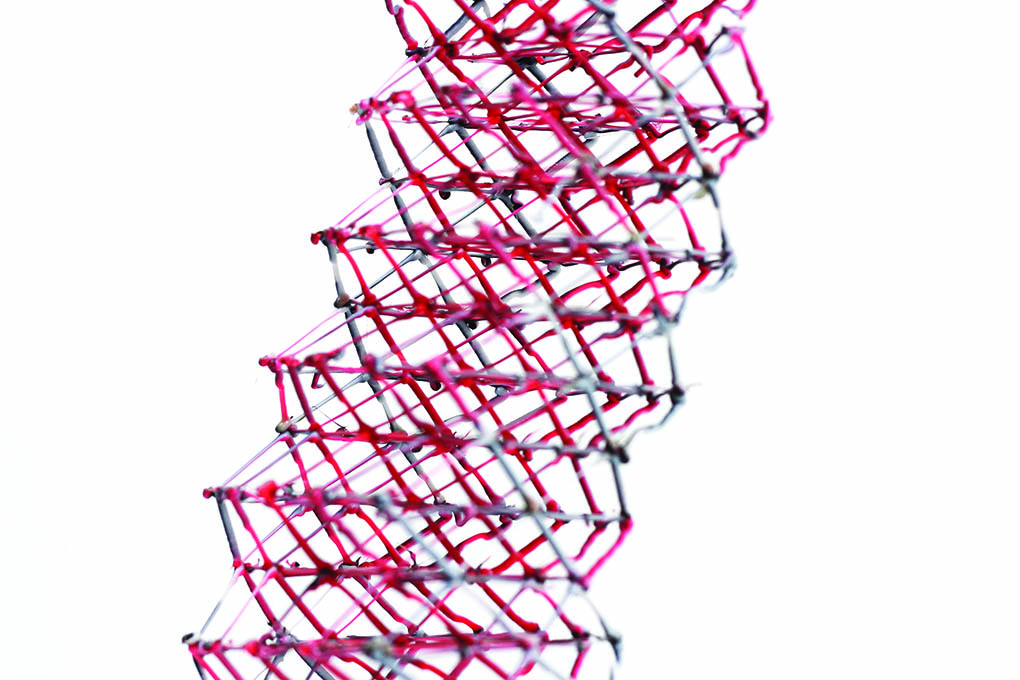 Acknowledgements
This research was conducted under the guidance of instructors Weiguo Xu and Weixin Huang during Graduate Design Studio course at the School of Architecture, Tsinghua University; Beijing, China; Fall 2015